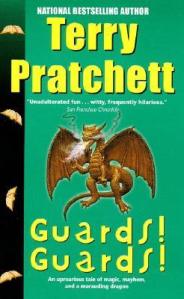 This book centres around the Night Watch of the City Watch in the city of Ankh-Morpork, the greatest city on the disc.  Carrot is a new recruit from the dwarf mines, while his colleagues are Captain Vimes, Sergeant Colon, and Corporal Nobbs.  Carrot is a young, eager man, ready to please anyone.  He is quite naive, but has great knowledge of the law.  Captain Vimes is the often drunk leader of the group. Sergeant Colon doesn’t like to see much action, and is usually in the office.  Nobby is one strange guy who seems to never play things by the book.  All four of these main characters are delightfully developed, and they go through quite a bit during the course of this book.  Vimes develops into a wonderful character, and has some hilarious drunken thoughts.  Carrot shows amazing initiative in a law enforcement group that basically has no power.  The Librarian, an orangutan at the Unseen University, joins the group.  He is one of my favourite Discworld characters.  Nice to see him here.  Lady Ramkin is another colourful character who breeds swamp dragons.  She is quite funny, and a great addition.  Lord Vetinari also plays a part in this book.  And you can’t forget the dragon.  The ensemble cast was very entertaining.

The story was Pratchett’s usual witty plot, poking fun at various subjects, such as police novels and “hero defeats the dragon and turns out to be the last king’s heir” kind of story.  Unexpected incidents is what I expect with Discworld novels, and this one did a very good job at that.  I expected Keystone Cops kind of buffoonery, but got an actual good story, albeit a silly one.  But it worked remarkably well.  I find that Pratchett has a good comic sense most of the time, though sometimes it isn’t as funny as I’d hoped.  However, Guards! Guards! was very funny.  There was more than one occasion when I laughed (thankfully, no one looked at me on the train when I did that).

Most of Pratchett’s books involve more than one setting location, but Guards! Guards! took place about 99% of the time in Ankh-Morpork.  I got to know the city better through this book, and sometimes revisited locations I’d seen in previous novels.  It’s a very interesting city in many ways, but I wouldn’t want to live there.  It’s a city that works with Guilds for thieves and assassins, who legally do their illegal work.  The city has a lot of unusual characters, shady neighbourhoods, and a dangerous, yet popular bar.

I think you should visit Ankh-Morpork through Guards! Guards! and take a tour with the Night Watch.  It’ll be worth your time.  So far, this may be the best Discworld novel I’ve read.  Highly recommended!