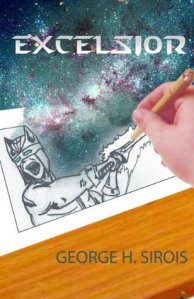 Excelsior, by George H. Sirois, is about a young man who writes a web comic that ends up being more true than he had ever imagined.  A young adult science fiction book, it’s very much your typical hero saves the day type of story.  There are many things to like about this book, but it’s not for everyone.

I should mention that this was an eBook that was published independently (paperback is also available), so I didn’t have high expectations for the editing.  In my past experiences with indie books, editing seemed to be poorly done.  However, I’m happy to say that this book is edited well, though there are a few minor mistakes with missing letters or punctuation.  But it was easy to read, the scenes were well-defined, and it was very easy to follow.

The story is a simple one.  A high school student named Matthew Peters writes a web comic called Excelsior that becomes quite popular.  However, it seems that his stories are more true than he expected.  His life is turned upside down.  What I found with this story is that it is a very straightforward hero story. No surprises, although creative, the plot isn’t unique.  However, after reading the afterword of the book, I see why it was this way.  I thought the story was very predictable.  Not that it’s always a bad thing.  Sometimes predictable stories give us a feeling of comfort and familiarity.  I did enjoy reading the story, though.  The action was described well, so I could imagine what was happening easily.

The characters are mostly your stereotypical characters in this kind of story.  Awkward teenager becomes the hero, supported by your usual cast of role models that guide and sidekicks that entertain.  I found that there was very little background information for the Denarian’s homeworld.  Where did the Krunation come from?  That’s something I’d like to know.  The dialogue was filled with cliche, something you’d read in a superhero comic.  And you know, that’s how I felt about most of the characters in this book.  The good were good and pure, the evil were completely evil.  There seemed to be no grey, it was all black and white.  It was all very campy, but gave me a bit of nostalgia.

Toward the end of the book, I noticed it could have a sequel.  If there is one in the works, I would read it.  It wasn’t a bad book at all.  It was entertaining, in a superhero comic kind of way.

Out of 5, I’ll give it a 3.  It’s a good read.  Don’t go into it thinking you’re going to read an amazing original story, though.  The feeling is familiar and comforting, but not very deep.

Even if it’s only 15 minutes, I’d like to work on my book everyday.  I want to make good progress on it.  Hopefully, I can even publish it this year.

My goal is at least 5 times a week on this blog.  On my Japan blog, I’ll be posting at least once a week, probably 2 or 3 times a week.  On my baby blog, I post whenever there’s something to post.

Visit a new place every month

For my Japan blog, I used to explore a new neighbourhood a couple times a month (although I don’t have the blog posts done), but since having a baby, it’s been impossible to do that.  However, we like to walk, so I hope we can visit someplace new every month.  I already did yesterday.  January is done.

A new weekly series for my Japan blog

I successfully finished a year of weekly photos for the second time, but I’d like to change it up with something new and informative.  I’ll be making a weekly post about a different prefecture in Japan with basic information, some photos (public domain photos, not mine), and places I’d like to see and food I’d like to try.

I think I say this every year.  However, I think I may actually work on getting real Japanese lessons.  My goal is to speak business level (probably won’t happen this year!).

I hope I can achieve all of these goals this year.