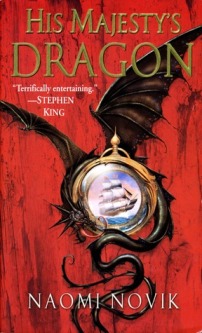 His Majesty’s Dragon by Naomi Novik is the first book in an eventual 9 volume series called Temeraire. This historical fantasy adds dragons to the Napoleonic Wars of the early 19th century.  I long had an interest to read this series, and now I’ve finally begun it.  So, what did I think?

The story, which starts out with Captain Will Laurence on the HMS Reliant capturing a French ship and a dragon egg.  From this moment on, we get to read how he and the dragon, Temeraire, become close and join the Aerial Corps.  Britain is at war with the French, lead by Napoleon Bonaparte.  Dragons are an interesting addition to the war.  I imagined that I’d be reading a lot of battles, but that wasn’t the case.  Much of the book was quite relaxed, involving Laurence’s developing relationship with Temeraire.  In fact, it seems downright slow to begin with.  But it improved a lot toward the end with actual battles and conflict.  The first half was almost devoid of major conflict, just some minor disagreements.  Excitement didn’t happen until the latter half of the book.  I felt that the action was decent, and it was described sufficiently.  But I felt like the plot wasn’t the focus of the book.

The focus was the characters.  Laurence is a very likeable character, as is Temeraire.  However, Laurence seems to be a bit naive when he joins the Aerial Corps.  His interactions with other characters seemed rather awkward.  But he has a good heart.  Lieutenant Granby was a good character that I liked quite a bit.  He was developed pretty well.  Emily Roland looks to be an important character in future books, though I have no idea what will happen.  Although not developed as well as I’d like, Captain Catherine Harcourt on Lily is a character I want to find out more about.  I hope to learn more in future books.  Also, Maximus and Captain Matthew Berkley didn’t strike me as very strong characters.  There are a lot more characters, but these are the main ones.  This book’s strength is the characters.  They are very well done, and I enjoyed them immensely.  I want to see what happens to them in the future.

Most of the story takes place in Scotland and England, with some time out at sea.  It was described well, and I could imagine being there.  I quite enjoyed the flight into the mountains of Madeira.  I had a little trouble imagining the battle harnesses and how the people stayed on the dragons above and below.  But my mind tried to make its own image.

One thing that struck me about this book is how everyone speaks very cordially and formally.  I’m not used to that kind of speech, so it seemed too polite at times.  I don’t know if that’s how people spoke 200 years ago, but it’s possible.

So, what did I think overall?  I enjoyed this book.  It was actually a quick book to read, and I had no difficulty finishing it in a short time.  After reading a lot of heavy, violent, extremely serious novels, this was a nice break.  I’m looking forward to the next book.

I’d give this 3.5 stars out of 5.  It’s very enjoyable, and dragon fans will be delighted.  It’s a light read that gets better the more you read it.  Definitely recommended.