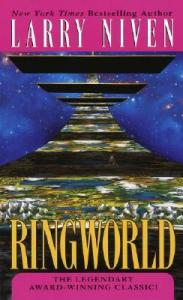 Ringworld, the first novel in the Ringworld science fiction series by Larry Niven, is set in the Known Space universe.  It’s an award-winning novel, capturing the Hugo and Nebula Awards, as well as the Locus Award.

I went into this book thinking it’s going to be a very interesting exploration of a vast world featuring hard sci-fi, mystery, and action.  I was mostly right. Ringworld was published in 1970, when science fiction was at an interesting stage of maturity.  Hard sci-fi was beginning to take hold, though the more classic sci-fi was still popular.  It has elements of both.  It’s got some good world-building that uses scientific explanations, while holding on to the old style, which is a bit corny, cheesy, or campy, however you want to call it.  Basically, I couldn’t take this too seriously, as it was fairly lighthearted with many moments of humour.

The characters are an interesting group.  The main character is the 200 year old Louis Wu, not at all elderly, but is healthy and in perfect condition.  He’s bored and wants another adventure out in space.  He meets Nessus, a Pierson’s Puppeteer, an alien species with three legs, two mouth-eye stalks that also function as hands, and no head.  His species is highly advanced, though cowardly.  Next is Speaker-to-Animals, a Kzin, a kind of catlike alien known to be very aggressive and warlike.  Finally is Teela Brown, another human, and quite young, naive, and extremely lucky.  They are all surprisingly likeable, though I tended to like Speaker the most.  All of them were brought together by Nessus to go on a journey to the mysterious Ringworld.  There is a lot of tension between species.  The Kzin don’t trust humans or Puppeteers, the humans don’t trust the Kzin or Puppeteers, and the Puppeteers are just afraid of everything.  This results in a few humourous situations.

Much of the story takes place on Ringworld, though begins on Earth and moves to the Puppeteer homeworld before that.  The 2850 culture on Earth seems like one big party.  It’s reminiscent of the free love era of the 60s that accompanied the hippie movement.  The Puppeteer homeworld seemed to be very sterile and, though highly advanced, not as interesting as I thought it would be.  We don’t get to see much of it, though.  The Ringworld is one big mystery.  That’s why they went there.  I found the cultures there to be well-done, though not particularly in-depth.  I liked the idea of Ringworld, and I’m interested in exploring it more in the sequels.

As I said before, the story was a bit cheesy.  It reminded me a bit of the original Star Trek.  I couldn’t take it very seriously, as the tension was often broken by plenty of humourous bits.  It was like a big, fun adventure.  I wasn’t very surprised by much, but it was a fun time reading it.

Overall, I’d give it 3 1/2 stars out of 5.  It wasn’t nearly as good as I expected.  It may have won awards, but they aren’t always winners for all readers.  I liked it, and I do recommend it for those who like a light sci-fi, but the hard sci-fi elements may also appeal to fans of more contemporary science fiction.  Definitely recommended.  It’s fun.

One thought on “Book Review – Ringworld”