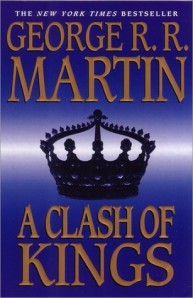 A Clash of Kings is the second book in the A Song of Ice and Fire series by George R.R. Martin.  The story picks up right where A Game of Thrones left off, and it continues in the same fashion.  That is, lots of death, violence, sex, and plot twists.

The first book established the explosive situation that we’re in the middle of now with this book.  The format is the same, each chapter following a different character, and we see what’s happening from their point of view.  We now have Davos, who follows Stannis Baratheon, and Theon Greyjoy, who was a secondary character in the first book.  From these points of view, we see everything that happens in this massive war that is now taking place.  It’s a very complex story, and we don’t always see everything that’s happening.  There are many surprises, including deaths that we don’t expect.  That’s one thing I’ve learned from reading these books, don’t expect everyone to live.  War is nasty, and the heroes may be the ones to die.

At this point, I’m finding that the most interesting characters to me are Tyrion, Daenerys, and Arya.  Tyrion is a master at manipulating people.  He is fascinating.  He’s not all bad, though.  He does have a heart, and he seems to legitimately prefer a more peaceful solution to everything, but not everything goes his way.  Daenerys is the rightful heir to the Iron Throne, after her father was deposed by Robert Baratheon.  She’s young, but she has dragons on her side.  She’s driven by her birthright, and she believes that’s most important.  She wants what she believes is rightfully hers.  Despite her young age, she’s more mature than you’d expect.  Arya is the youngest Stark daughter, and I think one of the best fighters.  She has a lot of drive, and she certainly doesn’t give up.  I’m really looking forward to seeing how she does in the next book.  I’m not so fond of either Baratheon brother, who both claim the crown, but especially Stannis.  I also don’t particularly like Catelyn Stark or Sansa Stark.  I definitely don’t like Theon, but I do like Jon Snow.  His story is going to be very interesting in the next book, I believe.

The setting is vividly pictured in my mind thanks to Martin’s ability to describe the scenes.  I get the image of a war-torn land filled with fires, burnt forests, and lots of death.  It’s dark, and that’s the way it should be.  The political maneuvering, betrayal, and blackmailing make this very unpredictable and anything could blow up at any time.  I’m loving it.  Unlike traditional fantasy, this series doesn’t use much magic, though it’s starting to show up now.  Also, the dragons are coming back.  This is getting very interesting.

I would give it 5 out of 5 stars.  Amazing storytelling, believable three dimensional characters, incredible world building, and surprises everywhere.  Highly recommended to anyone who doesn’t mind a lot of violence, sex, and death in their fantasy.

3 thoughts on “Book Review – A Clash of Kings”