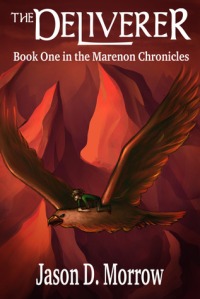 The Deliverer is the first book in The Marenon Chronicles by Jason D. Morrow.  It’s a fantasy novel that follows the popular theme of a modern day teenager being transported to another world.  Is that theme overdone?  I’ve been reading a lot of those it seems.

Well, this book starts out with Silas Ainsley and his grandfather Garland running from some bad guys, who turn out to be some of the main antagonists of the story.  It all starts out with our hero being killed.  It’s not often that a story starts with that, but it’s important in this case.  He’s transported to a world called Marenon, where he searches for his grandfather, and in the process, gets involved with a group of mercenaries searching for something that turns out to be part of Silas’ destiny.  This is a story about a kid who is the chosen one from a prophecy, and he must fulfill it.  It sounds pretty stereotypical, but the world is pretty imaginative.

I found the characters to be a varied group.  Silas, the main character, is a fairly naive teenager with some great sword skills.  He’d been trained by his grandfather without any explanation.  I thought that not only was Silas naive, but he also made a lot of bad choices.  He is far from being a perfect hero.  He is flawed, which is good.  However, I found his judgment to be a bit dimwitted.  In my mind, I was screaming, “Why are you doing that?” Garland is actually a very important figure in Marenon, and seems to show some good intelligence and wisdom.  Julian is a man who has deep pain related to his family history, which also proves to be very important in Marenon.  The mercenaries are a good bunch with some decent development.  There are other characters, but these are the ones that really matter, in my opinion.  The development is good, though some of the characterisations I’m not too fond of, especially Silas.

The story is fairly straightforward, and there aren’t so many surprises.  Not everything is answered in this book, which is a good thing.  It makes me want to read the next.  I have questions I want answered.  The biggest mystery to me is what happened to that other guy who went through the gauntlet with Silas.  Maybe he appears in later parts?  I have no idea, but I’d like to find out.  The pacing of the story was slow to begin with, but picked up later on.  It wasn’t completely consistent.

The world of Marenon is pretty interesting, though I feel underdeveloped at this point.  I’m interested in seeing more of the world.  I like to see what created worlds are like in my mind, and this one felt pretty dark.  I just didn’t really imagine there were bright sunny days, considering a lot of the action took place at night, or so it seemed.  But this is the afterlife, so does it have its own sun?  I just didn’t get the best sense of the environment, though it did feel moody.

Did I enjoy it?  Yes, I found it interesting.  I liked the characters, but didn’t feel much attachment to them.  I thought the idea was imaginative.  The story is good, though not as strong as I’d hoped.  The world needs more development, but I feel I’ll see more in future parts.  Do I recommend it?  Sure!  I think anyone who likes young adult fantasy novels will enjoy this.  Finally, I would give this a solid 3 out of 5 stars.  Good read.  Not amazing, but decent.