I have drawn a lot of maps over the years for Ariadne, and I’ve shown it in the past (a rather fuzzy-looking photo).  But finally, I’m digitizing them.

I don’t have a scanner, so I used the next best thing, a digital camera.  I took a high quality photo to get as much detail as possible, and to make it absolutely clear, as it has faded somewhat.  I’m using paint.NET to do the editing, and so far I’m liking it.  Here it is so far. 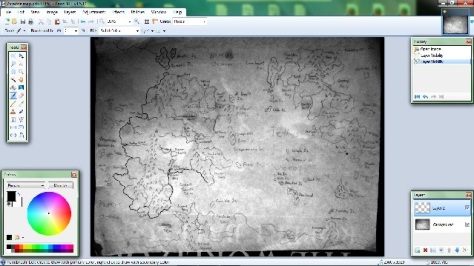 As you can see, it’s just a screenshot of paint.NET with my map.  It’s not clear, and you can’t read much of it, but that’s how I wanted it for now.  I just wanted to show you the progress.  On the left side of the biggest continent, you can see that the coastline is bolder.  That’s what I’ve done so far. The process will take some time.

The original map is unedited, though.  I’m drawing on a layer, and I’ll be using that layer for the basis of several maps, trying various styles, types of information, and maybe even an image of the planet itself.

So, I have a question for you.  What kind of map would you like to see? Leave a comment with your answer.