I have to let you know that this is the 666th post on this blog.  And what a wonderful coincidence that there is something that matches this week’s question very well.  Common in fantasy fiction, we often have an all powerful antagonist, and sometimes they are demons. 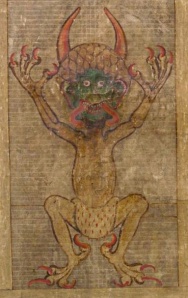 Question 3: How difficult do you find it to write characters who have vastly different beliefs than you?

Okay, so in full disclosure, I’m not sure I’ve really written a character yet who has a vastly different belief system than I do. I’ve written characters with different genders, ages, educations, and socioeconomic classes, but those characters still bear my own Midwest sensibilities.

The closest I can come to answering this question is with regard to a short story project that I’m currently researching. Several years ago, an event happened in my small town in which people’s values were challenged by a family who “saw things differently” (how’s that for vague?!). My goal is to fictionalize the events, but I still want to explore  how these issues of difference, “us” versus “them,” permeate everything we do.

The challenge I face in writing this piece is more of an external one than an internal one. I believe I can write this story with an open mind, but I am very much a product of that same small town where the events occurred and I feel a sense of obligation to that community to be respectful of their position, too.

Depends.  I haven’t written any characters with different religious beliefs.  Or rather I haven’t dug deep into those beliefs yet.  I have written characters with different morals and values before.  Quite a bit actually.  It’s not too difficult.  I’m not writing myself, I’m writing about a character I created.  I have stopped mid sentence and wondered if people will think I’m writing about myself, I think that’s a risk most writers take.

What I try to do is make sure the character stays true.  I have a character who’s controlling and a bully.  I have another one who’s an adulterer and one that’s a drug addict.  I am none of those things and would rather die than be a party to it.  But I really enjoy writing those characters.

I will admit that writing allows me to investigate different lifestyles.  Similar to role playing or acting.  The characters are real, in my head.  They are closer to friends or family and I want them to be true to who they are.  Writing allows them to do that.  In a way, it’s a little freeing for me, I can live darker fantasies through my characters.  I can write about a controlling psychopath without getting my hands dirty.

I don’t write about different religious beliefs.  I purposely hang back from that.  There are other things I refuse to write about because I don’t want my name attached to it and because I wouldn’t want to read it.  Basically, I write what I want to write.

Now this is a good question. And one that any author writing a story where a character’s beliefs change should make sure they take into consideration.

Strictly sticking to the word “belief” as I would use it, what a character considers to be true or false (and let’s also include what they think about the nature of truth itself and how important it is, because there are things someone couldn’t believe without disagreeing with me on that), my answer is “not difficult at all”.

Religion is not an exception. I don’t have any difficulty writing characters who believe things I don’t about gods, miracles, or prophets, precisely because I don’t make any important character a stereotype of their religion. I know that stereotypes are a kind of laziness themselves, but making a main character a stereotype would require getting into the head of a very specific mindset, while recognizing that every person is an individual means less time spent on avoiding a type of “inaccuracy” that isn’t actually any kind of problem.

But some people use “belief” to mean all the practices and rules associated with a religion, as in “telling me to not discriminate against gay people is disrespectful to my beliefs”. And based on my experience, I do tend to mostly associate this usage with people like that example; people who are looking for an excuse to claim that their own intolerance is itself something that people are unfairly intolerant of. Anyway, I don’t like using the word “belief” to mean this, but what little I’ve written that involved religious practices or restrictions wasn’t particularly hard either.

As for things like actually hating gay people, antagonists like that probably are the hardest kind of character I’ve tried to write.

In the past, I had trouble with this.  I was just starting out as a writer in high school, and began fleshing out characters and ideas with a friend through role-plays that turned into multiple novellas.  After a while she pointed out that I had a tendency to be too “uptight” with my characters – I didn’t want them to do anything wrong, or at least anything that I didn’t personally agree with.  Meanwhile, she wrote about demons who quite literally tore my characters to shreds.  It was a big wake up call for me.  Now, with my tendency to write with religious themes and shades-of-gray morality, it would be hard for me not to make my characters do or think things I didn’t agree with.

So far, I don’t feel like I’ve had much difficulty in writing characters who don’t share my beliefs.  In fact, I’m pretty sure none of my characters share my beliefs!  For me, it comes down to understanding how a character got those beliefs and why they hold on to them, and then letting them clash naturally with those who think differently.  Most everyone wants to be doing the good-and-right thing; even selfish people are selfish for a reason, whether it be out of self-defense or a feeling that others are deficient and undeserving.  So it’s just a matter of figuring out what ‘good-and-right’ means to each character.

I enjoy exploring other ways of thinking through characters. It’s interesting to think outside yourself, discover how a character might respond very differently than myself based on the beliefs I’ve outlined for them.

Coming up with that belief system and understanding how a character would act based upon it does take more thought and time than one based on a system similar to what I am familiar with. As long as the story calls for it, that time is worth the effort to attempt to create a thought-provoking character.

I absolutely love writing characters with opposing beliefs to mine. It allows me to delve into different ways of thinking that I wouldn’t otherwise even contemplate. Psychology intrigues me like nothing else. Discovering and uncovering what makes people tick is a constant occupation of mine – beliefs are part of what make people do the things they do.

I usually don’t find it difficult at all.  As an anthropologist, I’m trained in cultural relativism, which is another way of saying “It’s all good.”  The only time I have difficulty is in the occasional scene from the point of view of the antagonists because I do believe that there is such a thing as evil.  You don’t have to be religious to know right from wrong, and characters who do bad things for the wrong reasons are difficult to write.

Pretty difficult in the beginning, but as I begin to flesh out their design and their background, etc., they come to life on their own. When I work to have a character think things differently than I do, it’s a work in progress that I draw on outside sources for – how someone I know reacted and what they believed comes into play a lot.

Extremely. I find it extremely difficult.

When I was a kid I used to write stories about my friends and I going on grand adventures and the like. I was always the main character, so of course the story always reflected myself, my dreams, my beliefs. As I got older I began to realize that I was turning myself into a “Mary Sue” character and that maybe, just maybe, I should try making up some characters instead. My writing got better instantaneously, but there was still always that problem of separating myself from the character. I regularly (by accident, of course) infuse my characters with my own opinions, have them follow a thought process that is very clearly mine, and design them to hold similar beliefs and values to myself. Often, the editing process for me involves a total overhaul of my main character to make sure that they are themselves instead of me with a different face.

The hardest part for me is religious belief. I don’t know if I’ll ever be able to write a religious character as my main character because I’m atheist. I grew up in a Catholic family and I know enough about religion to be capable of writing someone with religious beliefs, but I think I would wind up disliking the character so much that I wouldn’t be able to continue.

(As an aside, it’s not that I dislike religious people; I’m actually very tolerant of other people’s beliefs. But I think you have to have a connection with your main character, and I would have a hard time connecting with a character who thought the exact opposite of what I think.)

It’s pretty easy to write characters that have the same beliefs as me, but then they’d all sound like clones of me.  But I find it interesting to write characters that are vastly different than I am.  But it’s not the easiest thing to do.  I think the biggest problem is making that character’s behaviour and beliefs exaggerated or stereotyped.  That’s the kind of thing that needs to be avoided.

I’m not religious, but I find religions fascinating.  Politically, I’m quite liberal, but I find it interesting to write a conservative character.  It seems that with fantasy, it’s easier to write characters that have different beliefs than I do, because they live in societies that are vastly different.  I can make everything up.  However, if it takes place around our time on Earth, it’s more difficult.  They have to be believable.

What do you think about writing characters with different beliefs than you?  Do you find it difficult or easy?  And who do you agree with the most?  Leave your answer in the comments below.