The expectations of Pluto were that it was going to be geologically inactive, probably very icy with plenty of craters. As you’ve seen before, Pluto has a very unusual surface with a lot of variation. A closeup on the equatorial area along the edge of the bright heart-shaped region revealed something unexpected: mountains. 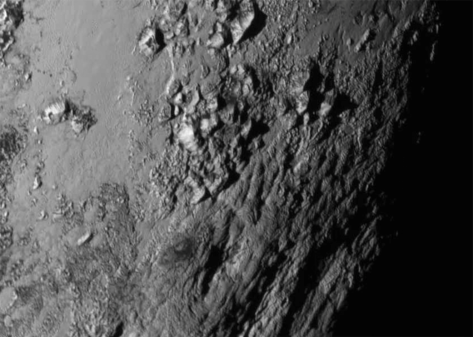 Due to the lack of craters in the area, it’s estimated that these mountains of ice are around 100 million years old. That is very young geologically. This implies that Pluto is geologically active, or was recently. And there’s no chance of this being from tidal forces, as Pluto and Charon are tidally locked.

On the topic of mountains, take a look at this closeup of Charon.

What is going on with that mountain in the top left of the inset? It’s in a depression. This has scientists scratching their heads, as this is highly unusual.

We’ve got so many mysteries already popping up, this is very exciting. I’m looking forward to more images.

Anyone have a logical explanation for the mountains on Pluto and Charon?

Authors rarely work alone. They usually have professionals doing editing, book cover, and so on. However, before the book is published, many authors like to get help from other sources, unpaid sources.

Question 37: Do you use beta readers? How many?

I absolutely use beta readers! But let me share my definition of “beta readers” so I can answer this clearly. I think of beta readers as someone who will read a manuscript “cover to cover” and provide at least as much feedback on the story as they do on grammar, word choice, paragraph structure, etc. Often – for better and worse — betas are not writers.

One thing about betas that we must be attentive to is that they are generally hard to find, and they don’t want to be asked to repeatedly read works in progress, so you usually only get to use them once per novel…maybe twice, if you are lucky. They expect the manuscript to be in very good shape when they read it. And you want it in very good shape when you give it to them to get the most useful feedback they can give.

Separately, I greatly value workshops such as CritiqueCircle where I can submit a chapter a week, and get detailed feedback from 10 – 12 readers who are also writers. This method generally results in detailed reviews of the writing down to the word choice, sentence structure, etc. The readers each week are not consistent, so with this model I usually only see about 50% consistency from week to week. By the time I put an entire novel through such a workshop, only a handful of critiquers have read the entire manuscript. So unlike betas, there is little valuable feedback on the story as a whole.

Both workshops and betas are are extremely valuable, because both provide different insights.

Last, and related, I do use a professional editor. Our contract is that she focuses on line editing, word choice, grammar and the like. Inevitably, though, she will also provide some feedback on the whole.

Back to betas: I generally have five or six. The first three are family. There is of course a built in bias (if not stigma) about using family, but they can be extremely helpful. In my case, I’ve got  well-read twin 16-year daughters who enjoy my work, and my wife has a Masters degree in English Literature. She also enjoys my stories (and she is capable of calling BS when I write poorly and will share great detail as to why some sections don’t work…). The downside, of course, is that not only do they have a built in preference for my work, they think like I think and see the world as I see it to some extent, which makes them blind to what other people – perhaps many other people – would object to.

Beyond them, I can generally find about  three more people to ask to read a manuscript. It is not a consistent three at this moment, though. In the past, some have been writers, one has been a fifty-year old academic, one was a man in his sixties, one was a teenage girl, etc. So it has been an eclectic mix. No matter who they are, my view is that betas, workshop critique partners, and a professional editor are all critical to creating a quality product.

I’ve only had one experience with beta readers so far. I sent my draft to three, only one of whom actually finished and supplied feedback.

That one was very helpful, though.

I have never used a beta reader, but I’m curious to read what others have to say about them.

I used about 5 for In Siege of Daylight, through different stages of the process.  I don’t think there’s a right or wrong number, but it would distract me if too many readers opinined on plot, writing, characters, etc.  I’d rather get less volume but higher quality of feedback.

I use beta readers constantly throughout my process.  The highest beta count I had was on Book 1, where 15 people read through it and gave me varying levels of feedback; that decreased to four and a half on Book 3 (one beta got hijacked by real life and never finished it), but all four (and a half) are solid and extremely helpful betas when their lives permit it.  One of them reads my dailies or weeklies, depending on how quickly I’m going, and gives me immediate feedback on characters and dialogue; one reads full chapters; and the other two and a half read the full document once I’ve finished a draft, then give their advice and opinions on it as a whole.  Then we go through the same process on the rewrites!  I’m fortunate to have some very literate friends who also love my genre and have the time to spare — but then I beta read for one of them regularly, and two more whenever their own writing is in need of a critical eye.  So it’s a good relationship.

I used to use beta readers and made some good friends that way, but when I happened across a critique group, I received exactly the kind of feedback I was looking for, and I’ve stuck with that ever since.

I’m currently using as many beta readers as I can find. It’s not easy to find them when offering up a novel of 166,000 words. As a rule though, regardless of the length of my book, I’d want at least five. If all of two out of three give the same critique in a section of my work, it’s not the same as if two of five think it. And they say that if the majority of your beta readers say the same thing, you should fix the issue. For me at least, it’s a big deal to change what I’ve written.

Yes, I have a small core of people I trust to give me unbiased feedback. I don’t want someone to tell me they loved it. I want to know what they loved. What worked and what didn’t.

Things didn’t quite work out with my last book, and my beta readers didn’t all get the book at the same time. It seems to have worked out.

I try to. I didn’t for my first novel and I think it shows. But I did for my second and I also think that shows. I try to keep the circle small – with no more than 5 people, but no less than 3. If I had more people whose eyes I trusted, I might reach out to more hands, but at this point, that’s not the case. I find beta readers nearly invaluable.

I think that beta readers are a definite must, but I don’t have a huge amount of experience with them. For “Nowhere to Hide” I had precisely one beta reader, and I loved her, but that was a bit of happy luck. We already knew each other and decided to swap novels, and it turned out that we synced very well as each others’ beta readers. We had similar opinions on the way things should be written, and every suggestion she made sounded completely reasonable.

That’s the key, I think, is finding someone with whom you can agree with their suggestions. It’s no good having a beta reader who picks the ever-loving hell out of every aspect of your novel and makes you feel like it’s a complete piece of crap that can’t be fixed. You need a beta-reader who understands how to convey good advice and hold their tongue when an issue they have is a matter of opinion that needs not be changed.

At the moment, I don’t have any. I’m not at that stage yet. But when I do get to that stage, I hope to have several beta readers. But for now, I’m using Critique Circle for similar reasons. But one thing that beta readers do that critiquers on Critique Circle don’t do is read the entire story. It’s good to have beta readers for consistency. But it’s also good to be a member of a critique group where you can get a variety of opinions, though not always what you want.

My question is, when do I start getting beta readers? And who? And how? I need to research about that.

Are you a writer? Do you use beta readers? If so, how many? Let us know in the comments below.