This is the beginning of a series of weekly posts related to current events in science. I’ll pick a big story from the past week and post a video or two about it.

This week, the big news is actually incredibly huge news. LIGO, the Laser Interferometer Gravitational Wave Observatory, which is run by the National Science Foundation, detected gravitational waves for the first time. This confirms what Albert Einstein theorised and what many physicists had suspected for quite some time. What caused the gravitational waves? Two black holes merged into one 1.3 billion light years away, and we were able to observe the resulting gravitational waves. Watch this video by MIT.

And here’s Neil deGrasse Tyson explaining it. Always love having him explain things. I loved this interview.

So, basically, everything that Einstein predicted has been confirmed now. Einstein’s work is correct. Wow. Also, could this be a Nobel Prize for the team?

What do you think of this discovery? Discuss in the comments below!

It’s Valentine’s Day, the day when women give chocolates to men in Japan. But that’s not what I’m going to talk about. This is what I see right now. 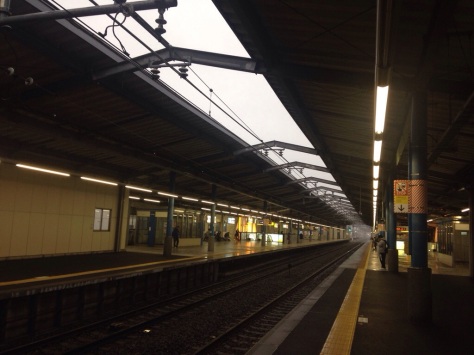 This is Shonandai Station. The rain is heavily beating on the roof of the station. It’s a downpour. It’s currently 18 degrees Celsius, which is highly unusual for winter here. Today is expected to be sunny in the afternoon, very windy, and 23 degrees.

What’s going on? Is it climate change? No, a strong low pressure system has taken root over the Sea of Japan, and it’s pulling up warm tropical air from the Taiwan region. It’ll be a beautiful afternoon.

It won’t last, though. Tomorrow, it’s expected to snow in the evening. Sudden change, isn’t it? Well, Friday’s forecast is for 19 degrees now. Up and down. It’s too springlike.

February continues along with some great stats in the views and comments categories. After a full year of no real increase in views, this month finally looks to beat my previous best views, which was set in January 2015. Looking to reach 4,000 for the first time this month. It’s also been quite the week on the language front, as well as with writing. Let’s see what’s going on.

I started The Lion, the Witch and the Wardrobe by C. S. Lewis this week, and I am now 93% finished. It’ll only be a few more minutes of reading, and I think I’ll do that tonight. Consider it finished. Fastest book since I read 2001: A Space Odyssey. A little progress on Keepers of Water by R. G. Porter. It’s now at 39%.

I talked a lot this week about the Snowflake Method, which I am going to incorporate aspects of in my planning and outlining. You can read the original post here, in which I compare the method with what I have been doing. I followed that up with a post about what I will be using from the Snowflake Method here. I haven’t had much discussion on the second post. I think that’s the more relevant post, so please check it out.

I made a big decision this week, and that is to focus on learning Esperanto. Why? It’s quick and easy to learn, and it’ll help make other European languages quicker and easier to learn. I wrote about it in this post. Please go and read that.

With that said, I did make a little progress in French, and am now at level 3 for Esperanto on Duolingo.

A lot of anticipation going on this week. I’ve been looking into my daughter’s school, as well as figuring that I need to go to the Consul-General in Calgary as soon as possible to get my Japanese driver’s license translated. I need some photo ID in English with my address if I’m going to be able to do anything.

Nothing this week, but I’ll see if I can get a video or two done this coming week. It would be nice to get some progress done on the Taste of Japan videos.

I need to update review lists, reading challenges, and a couple things on the right sidebar. Just a little cleaning up and making sure everything is updated. I should also update the languages page to reflect what I’ve been studying.

Nothing to update this week.

The Next Week’s Goals

At least one video for YouTube, I hope. I also hope to make good progress in Esperanto. I should get the blog updated, and plenty of blog posts. I still have to get that Top Ten post done, though it’s not a big priority. I have a lot to say about writing, though. On the immigration front, I need to get my resume done up, so I can start applying for jobs soon. I also want to contact my daughter’s future school. And finally, I’ll be starting a new book. That reminds me, though. I need to write a few reviews. I should get on that.

How about you? How was your week? Anything planned for the next week? Let me know in the comments below.