It’s been an interesting week. So much talk about fire and politics. I want to stay out of politics, but others won’t let it go. Getting tired of that.

Still need to make my private space. Once I do, I’ll get to work on writing.

A bit more Esperanto studying, but no increase in level. I should get back to French, as well.

My wife now has another couple things set up for life in Canada. English lessons will be soon!

Getting close to getting back to work on videos. I think it’ll be easier once I have my own space for my computer. However, I have been looking into how to set up payment for monetizing my videos. A bit more complicated than it should be, unfortunately.

As I said before, I spent a lot of time talking about wildfires in Fort McMurray, here in Alberta. Unfortunately, there have been a few people who have decided to take this opportunity to blame various political figures with memes that are actually complete lies. Been trying to battle that, but there are people who just won’t learn. Back to posting twice a day, though. The stats have rebounded very nicely.

I should look at some online courses that may be useful.

The Next Week’s Goals

I meant to start up a weekly series this past week, but never did. I think I’ll remedy that this week. Quick Facts will be back! And then the following week, I’ll restart Top Ten. And maybe after that, get to work on Worldbuilding. Also, I need to start that restaurant review blog. The hard part is thinking of a name.

How was your week?

Last night, I checked the Aurora Forecast app on my phone. This is what I saw: I’m at the red pin position. All that red just to the north. Well, a quick check outside revealed a faint aurora all over the sky. There were a lot of lights around, so it wasn’t very bright. I told my wife that we could see aurora outside, and we quickly went out. We took my sister’s car to the next neighbourhood over, which is right on the edge of the city, and we went into a park under construction. No lights. The result? Amazing aurora. Best I have ever seen.

We came back home, and my wife got her camera. Turns out we could’ve just gone to the park near the house and it was nearly as good. And she took pictures. Here are a couple she took. 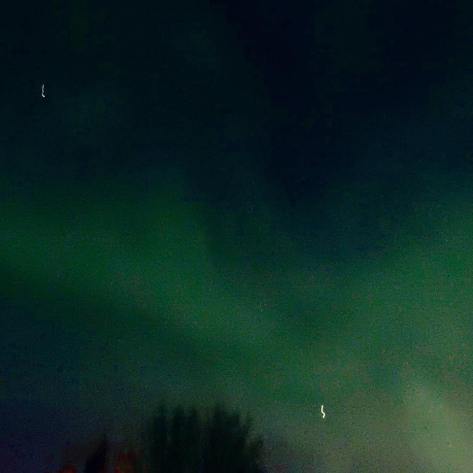 It was green! We could see that it was green with the naked eye, but the camera captured it wonderfully. But I really like the next picture. 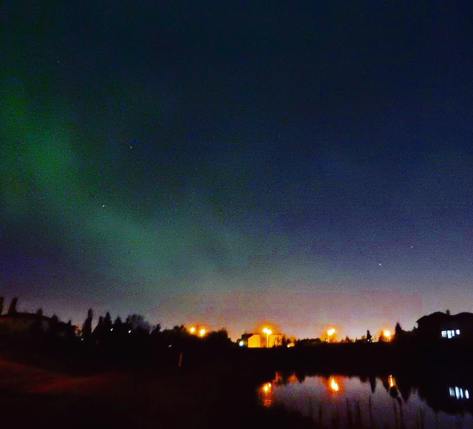 Aurora and city lights with a pond reflection. Although it’s somewhat blurry, that’s what you get when you don’t have a tripod and have a longer exposure.

And you know what? There’s a possible repeat performance for the next two nights.

Did you see the northern lights last night? Have you ever seen it? Let me know in the comments below.