It’s a crowdfunding platform for artists and creators. Youtubers, authors, bloggers, webcomic creators, and artists are the most common kinds of content creators. The system allows a patron (a supporter) to pay a tip to the creator, whether it’s for each piece of art or video created, or it’s a monthly payment that they set themselves. It can be as low as $1 per month. But there are rewards for those who pay more. Think of Patreon as a way of thanking the creator for what they do.

Why did I join it?

It’s a way to help me support my family and pay the bills while allowing me to spend more time to writing and blogging. I also intend on creating videos. However, my main focus is on writing my book.

What will I do with the money?

Pay bills, depending on other income. It will also help me pay for editors and any other person I need to pay to make my books as professional as possible.

What do you get?

As a patron, you get to see behind the scenes videos and other information that only patrons can see. You’ll also get exclusive access to samples of my first draft as it becomes available, and likely monthly. There will also be other samples of my writing you’ll be able to see before it’s available to the public.

Where can I find it?

You can find my Patreon page right here!

I’m open to other suggestions for rewards or exclusive content for patrons. Let me know in the comments!

The biggest one is the ICE District. One of the centrepieces of this project is Rogers Place, the new home of the Edmonton Oilers. They’re going to start playing there this fall.

Can you imagine walking up these stairs? 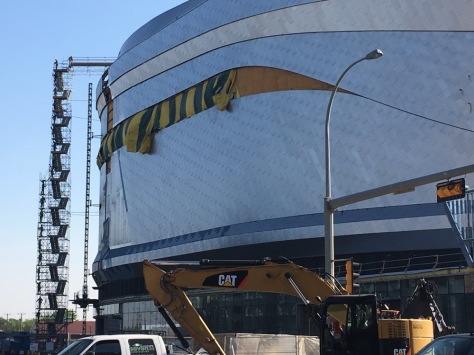 A bit further west, there’s this office building. It’s pretty narrow, but from what I’ve seen of the rendering, it’s a lot of glass.

Moving back to the ICE District, here is the office for the project. Inside, there’s a model of the project, which you can see as the glowing buildings in the window. The three tallest towers will be the three tallest buildings in the city. The tallest will be the tallest building in Canada outside Toronto at 251 metres tall. It’ll be the headquarters of Stantec and above that, condominiums. Can you imagine living in the penthouse?

While walking east, I came upon the Fox towers. The one on the right is finished, while the one on the left is under construction.

Back to the ICE District. Here is the main construction site for the Stantec tower and the hotel. Lots of cranes and a big hole in the ground.

There’s a tower that’s been topped out. It’s the City of Edmonton Tower, and will house a lot of offices for the city.

A close-up reveals a gentle curve.

I went up into a parkade across the street to get this photo. It looks much bigger in person. This is where the Stantec and hotel towers will go. 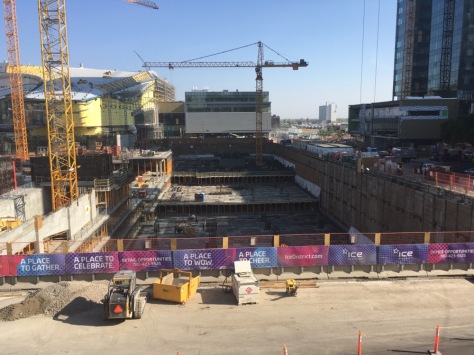 You can see the location of Rogers Place in relation to the hole. 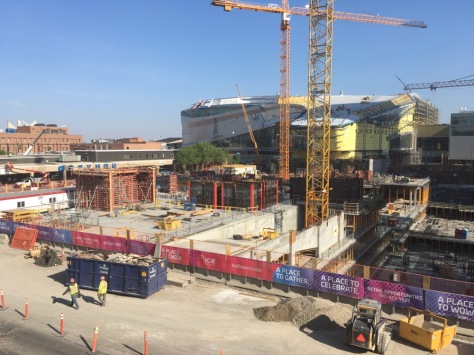 And here’s the City of Edmonton Tower from the other side. You can see the curve here, too.

In the heart of the financial district is the Kelly-Ramsey Building. This office tower is on the site of a historic building that burned down.

Luckily, they were able to save the outside of the building, took it apart brick by brick, and then rebuilt it as part of the podium of the tower.

And that is all I managed to get. There are several other construction sites, most notably the Royal Alberta Museum.

Next time, I’ll give you a tour of the skyscrapers I saw in the early part of my walk.