The book that made me laugh on the train surrounded by many people. It’s Japanese Made Funny, by Tom Dillon. It was also my third review on this blog. So, it’s now my third video review on YouTube. Check out the video!

It held up to my original rating of 5 stars. I still love reading it. 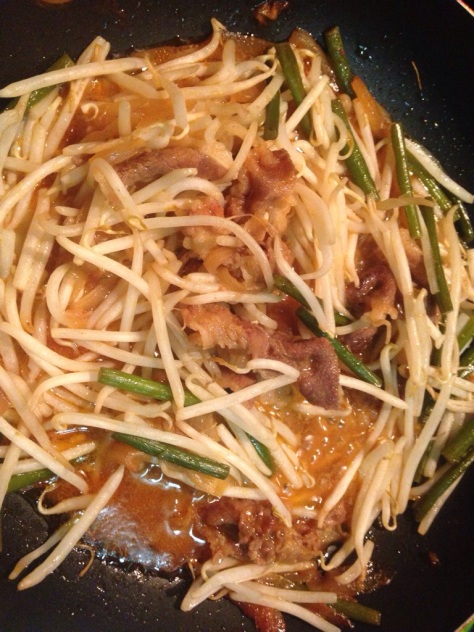 It’s beef with bean sprouts, onions, a spicy sauce, and garlic stems. Or so I called them. Turns out that the correct term for garlic stems is garlic scapes. I had no idea. Even my iPhone thinks it isn’t a word. It’s underlined.

So, you never know when you’ll learn a new word. What have you learned recently? Any interesting words?

My daughter is about to turn 3 years old next Sunday. She speaks both English and Japanese, but very basic at the moment. At this time of her language development, the changes are rapid. But the languages are uneven.

She can say many words in both languages, and while she understands English, she speaks mainly in Japanese. She can use past tense verbs in Japanese only. Only present tense in English.

Last night, there was a big breakthrough. I was putting her pajamas on, and she tried buttoning it up herself, but couldn’t. She said, “Dekinai.” That means can’t. I asked, “You can’t?” She answered, “I can’t.” That took me off guard. Not only did she understand and use can’t, but she also understood the difference between I and you.

She hasn’t used I in conversation until now. It’s always watashi or boku. Boku is for boys, though. She understand that now.

Language development is fascinating. She should be conversational later this year. I look forward to it.

And now, this is a train: 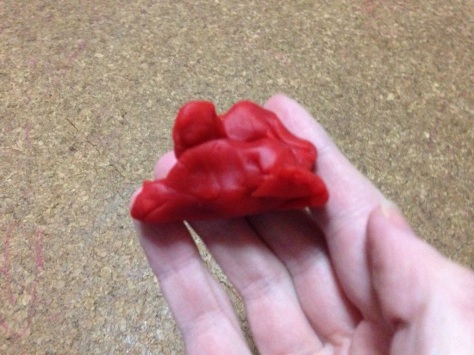 She gave this to me and said, “Happy birthday!” 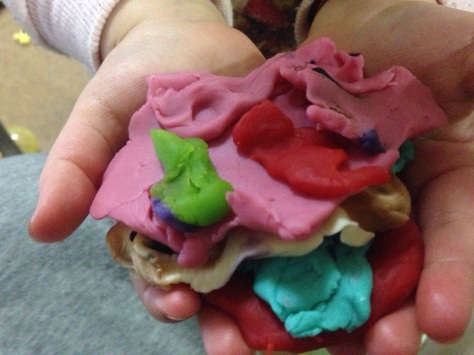 I’ve mentioned before I’m an INTJ personality type, and I’ve been living in Japan since 2005. My daily life at work is spent speaking English. My life at home is mostly English, and I concentrate on using English with my daughter always.

Well, I’ve been spending some time with the in-laws, and out of nearly 20 people, only one speaks English. I was immersed in Japanese. As there were so many people, as an INTJ, I was getting drained of energy. Imagine doing the same thing in a language I’m not fluent in? I had to concentrate on understanding and trying to answer. If you’ve ever spent time speaking a language other than your first language, it can be mentally draining. Basically, I feel sleepy.

Anyone else have to go through that experience? I think I need to really work on my Japanese.

July 30th, 1987.  A night I remember well.  I was ten years old and living in Edmonton, Alberta.  I was visiting relatives at that time in my hometown of Beaverlodge, Alberta.  I remember my parents were still in Stony Plain, near Edmonton, while I was up on my own.  I don’t exactly recall how I got there.  But that’s not important.  What’s important is what happened over the next 24 hours.

That night, we were in Grande Prairie watching a couple of movies, Dragnet and Superman IV to be exact.  Dragnet was entertaining with comedy giants of the ’80s Tom Hanks and Dan Aykroyd.  Superman IV was a disaster.  Maybe it foreshadowed what was about to happen.

On our way back to my aunt, uncle, and cousin’s home, we were treated to an intense thunderstorm so incredible that it was almost like daylight.  There was so much lightning, you could probably read a book.  I love thunderstorms, and even when I was ten, I enjoyed watching the lightning show.  Far better than Superman IV.

The next day, everything was going normally until we saw the news.  It was very troubling, and I was scared.  You see, July 31st, 1987 was the day that the tornado hit Edmonton.  27 dead.  It mostly hit the industrial area in the eastern part of the city, as well as some countryside, but it was devastating.  It was an F4 tornado, which is pretty powerful.  I’ll let this video show you how bad it was.  It’s a bit old, but you’ll see just what it was like. [Edit: Video no long appears to exist, which is a shame.]

What’s frightening is that it came pretty close to another relative’s house, and its path is very close to where my sister and mom live now.  When it was on the news, I called my parents.  They told me they were fine.  It was on the east side of the city, while our home was west of the city.  However, the weather was pretty intense there, too.  As you can imagine, a lot was going through my ten-year-old mind.  I was glad my family was safe.

Since then, I have seen some crazy-looking storms around the Edmonton area, as well as in Victoria, BC.  But I’ve also been through many typhoons here in Japan.  But nothing could match how I felt about that tornado.  We can ride out a typhoon, but a tornado destroys whatever is in its path.

Exactly 18 years after the tornado, I climbed Mt. Fuji.  A tornado can sometimes be shaped like an inverted volcano.  Strange.

Have you ever flirted with disaster? 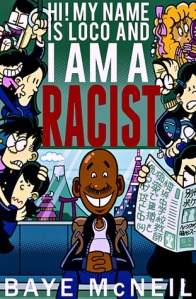 Hi! My Name is Loco and I am a Racist is  part memoir, part social commentary written by fellow Japan resident Baye McNeil.  He talks about his experiences ranging from his childhood in New York, his time in the Army, and teaching English in Japan.  But throughout this book, there is one common theme: racism.

He starts the book off with something most foreigners in Japan experience, the empty seat on a train.  It’s quite obvious that the reason is that he’s a black man in the homogeneous Japanese culture.  He returns to the empty seat several times throughout the book, sometimes as an enemy, sometimes as a friend.  He talks about his experience with racism not only in Japan, but also growing up and living in pre-911 New York.  But it’s not all about racism against him, it’s more about how he and everyone else in the world has some degree of racism within them.  Everyone judges others in some way based on their race.  I understand what he’s talking about, although his experiences are far more difficult than I’ve experienced.

It all sounds very serious, but Baye uses a lot of humour in his writing.  There are several conversations with a Japanese person throughout the book, many times humourous, but also perplexing. It shows how many people in Japan have such little experience with cultures outside Japan, they don’t understand a foreigner’s point of view.

I found his childhood experience growing up in New York to be fascinating.  It’s totally outside of my own experiences that I found it engrossing.  I learned a lot about life in 1980s New York City, at least his life.  His writing made it vivid.  I could picture everything he described, I felt like I was with him.  I could sense his feelings during his childhood, his time in the Army, his experiences dating with someone of a different race, and most of all, Aiko.  It was an emotional roller coaster.

The writing style is pretty conversational, and he sometimes rambled on quite a bit.  But it was natural sounding and very candid.  I felt like he was opening himself up to anyone who reads this.  You not only learn about him, but I think you also learn a bit about yourself while reading.  It forces you to think about whether you are racist, even a tiny little bit.

I would recommend this to a variety of people, those who live in Japan, those who are interested in racial relations, and those who enjoy autobiographies.  It’s a great read, and a great debut book.  Highly recommended.  I’d give it 4.5 out of 5 stars. 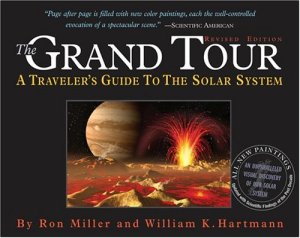 As many people know, I have a degree in physics and astronomy, so I love to read about space and the planets.  When I found “The Grand Tour: A Traveler’s Guide to the Solar System” in a bookstore here in Japan, I knew I had to buy it.  This is the third edition, published in 2005.  It was written by and contains artwork by artist and author Ron Miller and artist, author and astronomer William K. Hartmann.

The meat of the book comes next.  Instead of going through the planets in order, it starts off with the largest bodies in the solar system.  Beginning with Jupiter, we get to learn about each body, from the structures to the atmospheres.  It moves on to Saturn, then Uranus, Neptune, and finally the Earth.  After the Earth, it continues with Venus, Mars and then Ganymede.  Ganymede?  Yes, Jupiter’s largest moon is larger than the planet Mercury.  But Mercury isn’t next, it’s Titan.  Then it’s finally Mercury.  So basically, it continues on looking at the planets, satellites, dwarf planets, a few major asteroids, Kuiper Belt objects and comets.  Each is accompanied by the latest photographs and beautiful artwork.  It even contains photographs from Cassini and Huygens from Saturn and Titan, as well as the Spirit and Opportunity rovers on Mars.  It doesn’t include any photos from MESSENGER at Mercury, Phoenix at Mars, or Dawn at Vesta.  Those missions occurred after this book was published.

The book concludes with a section on Exoplanets and a glossary of terms.  I really enjoyed reading this book and seeing the artwork.  It’s a must for anyone who loves astronomy and planetary exploration.  I look forward to the fourth edition, if there is one, with pictures from Vesta, Ceres, Pluto, Mercury, and more!

I’ll give this a well deserved 5 out of 5 stars.  Highly recommended!

I Read Encyclopedias for Fun
Blog at WordPress.com.