It’s already December 26th, but it’s still Christmas for everyone in North America, and especially my family. I’ve already posted about my Christmas, and what I described pretty much went as planned.

My daughter got her present in the morning, then I took her to a Christmas party at her daycare/nursery. I then recorded a video at a big park and former site of Oba Castle. And I picked up my daughter, where she got a present from three Santas. That’s right, three. We had a kind of Christmas lunch with roast chicken and pizza, and later had roast beef and salad. But the one thing I wanted to share with you in this post is the video. So, please enjoy!

If you have any comments or questions, please leave them in the comments section below. Merry Christmas!

Turkey is delicious. At least, I think it is. I love eating turkey breast meat with the skin on, smothered in turkey gravy, along with a side of mashed potatoes and gravy. To me, that’s Christmas dinner.

The following day, we can eat more turkey! And having a turkey sandwich with barbecue sauce is great on the third or fourth day. It makes my mouth water. Amazing leftovers.

However, here in Japan, whenever I talk about Christmas dinner, people always say they’re eating chicken. Then, when I mention that I always ate turkey in Canada, they immediately say that turkey doesn’t taste good. They don’t understand how I can eat turkey. I think the problem is that they have such little experience with turkey in Japan, that they don’t actually know what it tastes like. And those who have tried to cook it don’t really know how to cook it so that it isn’t dry. It’s difficult to roast, as the breast meat becomes pretty dry if it’s not properly cooked.

But then, a lot of people in Japan prefer dark meat over white meat on chicken. Chicken breast is very cheap in Japan, which surprised me.

What do you think? Do you like turkey? And do you prefer white or dark meat? Gravy? Let me know in the comments below.

It’s Christmas Eve. Christmas Day begins in less than two hours. But unlike my Christmases in Canada, the ones I’ve had in Japan just don’t feel like Christmas. Not in the same way.

Well, in Japan, Christmas is all commercial. It’s not so much about family, it’s more for the children. It’s not a holiday, so people work. The big difference is that the build-up to Christmas just isn’t there. Well, there is a build-up, but in a totally different way. And the strange thing is that the day after Christmas, all decorations are gone. They’re replaced by New Year’s decorations. New Year’s Day is the biggest holiday in Japan, so that’s understandable. It overshadows Christmas in a big way.

There are many differences between a Canadian Christmas and a Japanese Christmas. And these are things I miss a lot.

I think the biggest difference is the anticipation. During December, everyone is anxiously waiting for their holiday to start and spend time with their family. This happens here in Japan, but for New Year’s Day. It’s just a different kind of celebration.

Ever spend Christmas in another country or culture?

In Canada, it’s quite normal for people to nod or say hello to complete strangers on the street. In general, Canadians are a friendly and polite bunch of people. And it’s genuine friendliness.

In Japan, it’s normal for people to stare straight ahead and ignore everyone around them. Whenever there is eye contact, there is a friendliness and politeness. People will help others out, especially if they’re foreigners or elderly. But in general, it’s not genuine friendliness. It’s a way to maintain the harmony of Japanese society.

When foreigners meet each other on the street and they don’t know each other, that’s when things become awkward. A more normal behaviour is usually just brief eye contact and a nod. That’s nothing unusual. However, what happened to me last night was very awkward.

Because of the tendency to avoid eye contact in public, many long time residents of Japan from other countries start conforming to public behaviour norms. But looking at people is a normal thing in Canada, so I often take a quick glance. Well, as I got off the bus, a white woman walked down the sidewalk in the opposite direction as me, so we were bound to face each other. I looked at her out of the corner of my eye, and she did the exact same thing with me. We both realised what we were doing, and maintained an awkward silence as we passed each other. Both of us noticed that there was another white person and tried to discreetly see if we recognised each other. The result was a very strange and kind of creepy eye contact, our faces forward, our eyes looking sideways, locked on to each other.

After that, I realised how ridiculous we must have looked, and my initial feeling was that I wanted to tell her how silly we were. However, I didn’t know if she was an English speaker. She could’ve been Russian or Polish or Romanian, and may not have been able to speak English. So, I just carried on going home.

In the country you live in, how do strangers behave toward each other in public? Let me know in the comments below.

The Christmas decorations started going up during the last week of October. The Halloween decorations were still up. And these lights are up for a long time. 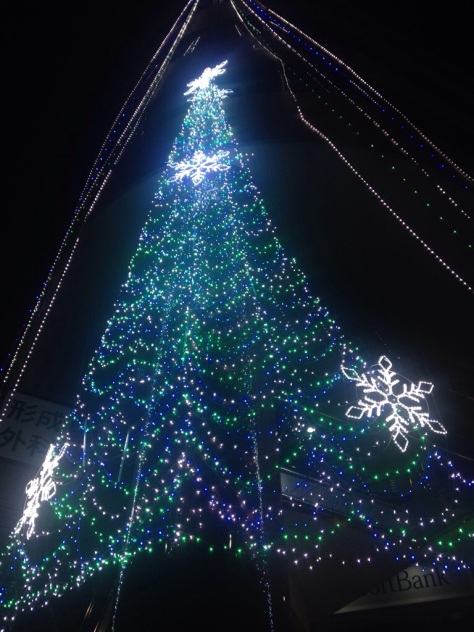 Do we really need Christmas decorations up for so long? I love Christmas, but it’s still one and a half months away.

What do you think? Is it too early? When do/did Christmas decorations go up in your area?

Last weekend, during my lunch break, I was able to go to the Ranbu Yosakoi Festival in Sagamihara, Kanagawa. Yosakoi is a type of dance that began in Kochi City in 1954 as a modern alternative to the more traditional Odori dance. This festival is held every year in September. They make plenty of noise! A lot of the music used is quite modern, and the dances are always very energetic. Very fun and uplifting.

In case you’re wondering, yes, I did take a video. And here it is. This is episode 2 of A Taste of Japan. Be sure to watch all the way through, because I have a full performance in this video.

Interested in seeing more? I’ll have a lot more Japan videos coming in the near future, and lots from famous tourist sites in Japan in October. So, please subscribe to my YouTube channel to see more.

What did you think of this video? Let me know in the comments below.

At the shrine near my home, there’s an annual festival in September that features local dance clubs, cheerleading clubs, a taiko drum club, and singers. In the past, there’ve been professional enka singers, but not this year. I took a few videos, and now, my new series on YouTube has begun.

Here is episode 1 of A Taste of Japan.

I used Windows Movie Maker, as it appeared the other video editor I was using has informed me I must now buy it. I get roughly the same result with WMM, though.

If you have any comments or questions, you know what to do. Oh, and subscribe to my YouTube channel already!

I Read Encyclopedias for Fun
Blog at WordPress.com.