It’s been 6 years since the earthquake and tsunami in Japan. It’s a very strong memory in my life, and something I’ll never forget. I recently started a new science channel and my first feature topic is about megathrust earthquakes and the 2011 Tohoku Earthquake and Tsunami. Check it out.

Any comments are definitely welcome.

It’d been a while since I’d felt an earthquake. On Wednesday, I felt the first one in a long time.

Is it possible to become desensitised to an earthquake? After all these years, it seems that small earthquakes like this are nothing more than a feature of the land. When they happened, my thoughts were, “Oh, it’s an earthquake.” Ten years ago, I would’ve been thinking, “Wow! It’s an earthquake!” They don’t seem to impress me anymore.

Wow. This was a first. My phone made a very loud warning sound at 3:06 am, and it turned out to be a tsunami advisory. 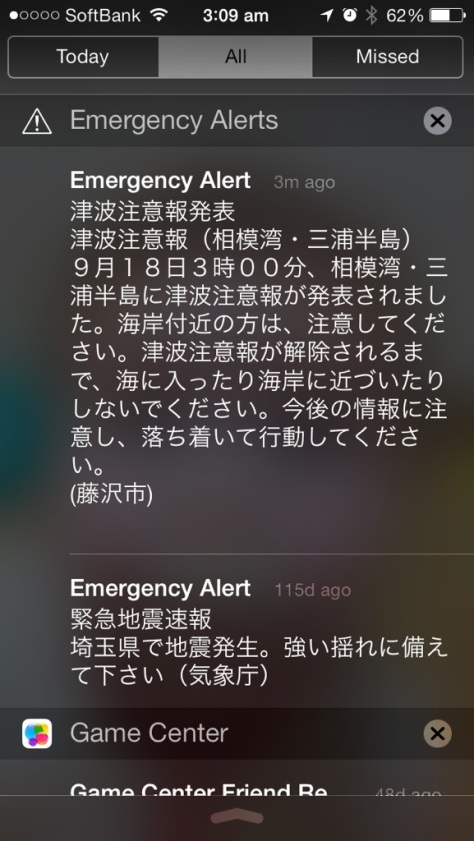 This advisory was for Sagami Bay and Miura Peninsula. I live in Fujisawa, which is on Sagami Bay. However, after checking the Japan Meteorological Agency’s website, it says that the tsunami will be between 0.2 and 1 metre, and will not cause any damage. However, we are advised to stay out of the water due to strong currents from the tsunami.

Here’s an English report by the Weather Channel. The magnitude 8.3 earthquake in Chile caused a more than 4 metre tsunami to hit Chile’s coast. It appears that 10 people have died, while a million people were evacuated from the coast.

I was sitting in the sofa writing my last blog post when the TV gave a loud warning tone. On the screen was an early earthquake warning in Japanese and English. An earthquake was about to happen. The epicenter was in Nagano, the mountainous prefecture famous for skiing and the 1998 Winter Olympics.

The ground didn’t start shaking, though. The laundry and the lights were swinging a lot, but I didn’t feel any shaking and there were no creaking sounds I usually hear during an earthquake. I sat as still as possible. There it was. A very slow but significant rocking movement. Imagine being on a big boat that was gently rocking and you’d understand the feeling.

This wasn’t a small earthquake. Far from it. It was strong, magnitude 6.8. The depth was 10 km. I didn’t hear about any damage or casualties last night, but from what little I’ve seen through Facebook this morning, there have been some collapsed buildings and 22 people injured.

Yes, it was a pretty significant earthquake. The slow rocking movement was very deceptive. We were actually moving a lot, just not in sharp jolts. Very strange feeling. I wouldn’t have known if I were standing up.

Living in Japan, I have to expect to feel an earthquake every once in a while.  There was one a couple weeks ago that was close by, but still was just a minor quake.  But today, there was a big one.  Not the big one, like last year.  But this one was in the same area, and it was magnitude 7.3.  Being a few hundred kilometres away from the epicentre, I’m pretty safe.  There was a lot of movement, but nothing earth shattering.

So, what does an earthquake really feel like?  If you’ve never experienced one, it’s hard to imagine the ground moving, and you moving along with it.  It’s a very unusual sensation that isn’t easy to describe.  Some earthquakes give a very sharp jolting shaking, while others are a milder rocking movement.

Today’s earthquake was a long, but soft rocking movement.  There was no sudden shaking.  It started off slowly with a side to side movement, and over time, built up momentum.  It got stronger.  At its peak, I could see anything hanging from the ceiling swinging back and forth vigourously, but I didn’t feel it as strongly.  Imagine standing on a raised platform that’s supported by massive springs and a movement damper.  Without the damper, the movements would be too strong to approximate the feeling of this earthquake.  Now, the side to side movement isn’t a rhythmic movement.  It’s quite random.  You can’t predict how the ground moves during an earthquake.  It’s also not like being on a boat (however, it can be like that in a tall building).  I was on the ground floor of my apartment building when it hit, so I felt the direct movement of the ground.  While the ground is moving, your body feels the movement, yet your brain gets conflicting information from your eyes.  You don’t see the movement, but you feel it.  This causes some people to get motion sickness.  Thankfully, I don’t experience that.  As the earthquake wanes, the movement becomes slower and slower until you can’t perceptibly notice the movement unless you lean against a wall to steady your body. However, toward the end of the earthquake, I could still hear the building creaking.

This description shouldn’t be applied to every earthquake.  I’ve been through some that had much stronger movements, particularly the one on March 11, 2011.  Earthquakes that are nearby have much more intense shaking, while this one didn’t shake, it rocked slowly.  Earthquakes that shake are loud.  This one wasn’t loud, but I could still hear it.

If you haven’t felt an earthquake, can you imagine the feeling now?