I’m starting something new. My daughter gets to take home two books from her school’s library. So, we’re going to show her library books together! Warning: This video gets a bit silly. Wait until the end where she talks about a topic completely unrelated to books. But it’s cute. The cuteness compels you to watch.

Have you read either of these books? What did you think of her silliness? Let me know in the comments section below.

And did you subscribe? If you do, you get to see all of the videos I make. I don’t put them all up on here.

My daughter has a big imagination. Some of the things she comes up with are silly, crazy, or unbelievable. I already have an idea of hers that I’d like to develop into a children’s book about dinosaurs.

I sometimes think that adults make things overly complicated. When we think of ideas for a story, we make it more complex. But to think at a kid’s level, we need a kid’s mind to give us the best ideas.

I find that a lot of my daughter’s ideas are linked to reality. The things she thinks of are related to recent events, TV shows she’s watched, or topics she’s interested in. At the moment, she likes to play princess. But she’s also interested in driving recently. She loves making the turn signal sound now. Not particularly useful for a story, but she includes these little things in her play.

Tonight, we went to the playground, and the entire theme of her imaginary life was a princess going to McDonald’s for hamburgers and chicken nuggets. At home, she’s often a pony with a towel for a tail. She especially likes unicorns. And now, she’s got a pony flying around (My Little Pony) fighting with Anpanman.

I’ll have to keep notes of her ideas. Maybe someday I’ll write about them.

For those of you with children, do you have any funny stories about your kids’ ideas? Let me know in the comments below.

I read mainly fantasy and science fiction novels, but I have another source of books I can read, children’s books.

My daughter has the entire Peter Rabbit series by Beatrix Potter and many Dr. Seuss books. I’m thinking about doing a new kind of review for these. I’ll have my usual reaction to them, but also have the reaction of my daughter. That is, does she want to read it again? Did she enjoy it? Did she try making her own story based on the pictures? I think I’ll write about that.

What do you think? Would you like to see children’s books reviews?

Authors were once children.  Hard to believe, isn’t it?  Many authors loved reading books when they were kids.  It’s my daughter’s third birthday on Sunday, and she enjoys books, though she can’t read them.  She’s mostly into colouring books at the moment, though she likes looking at pictures, too.  Last year, she got the entire set of Beatrix Potter books.  We haven’t read it together yet, since she’s not patient enough to sit down for more than a minute with it.  So, what did our authors enjoy when they were kids? 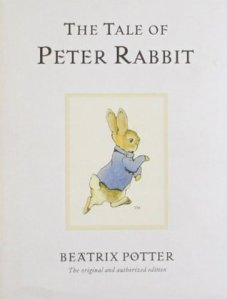 Question 12: My daughter’s third birthday is on January 25th. What children’s books did you read when you were a child?

There were these two Buddies books with a duck and a bunny and a monkey who were best friends and had adventures that usually involved standing up for people being bullied.  I really liked those but no one else seems to have read them.  I also remember a lot of Ezra Jack Keats books, and stuff like The Story of Ferdinand.  That’s right, Ferdinand!  You don’t have to fight if you don’t want to!  When I was slightly older, I read stuff like Sideways Stories from Wayside School and the Babysitters’ Club and the Chronicles of Narnia, Dark Is Rising, Castle in the Attic.  Those kinds of things.

I have dyslexia and didn’t learn to read until I was 9 years old. After that, I couldn’t stop. Children’s books for me were Podkayne of Mars, The Dragonriders of Pern, Stalingrad (a nonfiction book), Mutiny on the Bounty, and the Mowgli stories, which are NOT for kids. As far as suggestions for a 3-year-old, I wouldn’t even know where to start.

Oh man…what didn’t I read as a child? I don’t really know how it happened, but I was reading at a pretty young age, and my parents encouraged the habit by buying me no end of books. They used to pick me up at least one book every time we were at Coles, and back when the grocery stores and gas stations used to have those “one book available each week” sets we used to collect them all. I had piles of books about everything from fairy tales, to ghost stories, to an entire series about a group of girls who put together a club for babysitters. One of my favorites as a small child was the Paper Bag Princess, because who doesn’t love a princess who can take care of herself?

I used to love a series of books called Sweet Pickles—especially the one called “Elephant Eats the Profits.” As I got older, I broadened my horizons to Charlotte’s Web.

If you mean a very young child, anything by Dr. Seuss. And some associated with various cartoons and movies; for some reason I really liked the Gremlins book.

But after I really started reading, let’s see. James and the Giant Peach, A Wrinkle in Time, Peter Pan, and for less famous examples the Carmen Camera and Lucky Starr series.

And a lot of nonfiction.

I always wanted to read older, more mature books than I was allowed when I was younger, as children’s fiction felt me feeling massively unfulfilled in the fiction department, so I spent most of my formative years reading nonfiction, where the world was real and sometimes ugly, and I really appreciated that.

I don’t remember much before Chronicles of Narnia. I think that set the bar for me as a kid. In fact, I don’t recall having books as a little kid or having anyone read to me. I was set in front of the TV so that my mother could read her vast collection of mystery novels uninterrupted.  It wasn’t until I had access to the library at elementary school that the book bug sunk its claws in deep.

I love children’s books.  I still read them.  Some of my favorites are:

That’s probably enough to get you started.

I loved Dr. Doolittle when I was a kid, since I adored animals. Of course it wasn’t until I was about 8 or 9 that I could read them by myself. When I was very young it was anything that had to do with Disney. The only way to get the stories unless they were in the theatre was to read them, after all.

Happy birthday to your daughter!  I started out by reading Dr. Seuss books.  Hop on Pop was the first book I read on my own, and I quickly went through the collection.  Another favorite of mine was Where the Wild Things Are.

I started out with mainly nonfiction books, including the encyclopedia, of course.  I read a lot about dinosaurs, space, and animals.  I even had a bird field guide I liked to read and study the different species of birds.  When it came to fiction, I was started out with Hardy Boys, though I didn’t really read them much.  There were some books in elementary school, like Charlotte’s Web, and I also read some Dr. Seuss.  But in general, I was a big nonfiction reader.

What were your favourite books when you were a kid? What would you recommend for a young child today?  Let us know in the comments below.

My daughter loves looking at her books.  They’re mostly picture books, but she does learn a lot of words from them.  She also has an Anpanman book that has an electronic pen that says the word when it touches the picture.  It does this in English and Japanese.  It’s a great learning tool for her, and she loves playing with it.

However, she’s almost 2 1/2 years old, and we have the Complete Peter Rabbit Library that she got as a gift from my family.  I’m going to have to start reading it to her.  It’s a collection of 23 books, so that’s a lot to read to her.  I’m not sure how much I’ll get to read to her in one sitting, as she’ll probably lose interest quickly.  But hopefully, over time, she’ll pay attention more, start understanding the stories, and look forward to being read to.

One thing this’ll have a positive effect on is my reviewing.  I’ll be reviewing each book in the series on here.  They’re pretty short, so I can finish reading them pretty quickly.  I may read ahead, just to see where the story goes, and review.  Reading to my daughter will be much slower.

I hope that my daughter will come to love reading as much as I do.  It’ll enrich her mind and fuel her imagination.

If you’ve read Beatrix Potter’s books, please leave a comment with your impression.  And which book did you like the best?