I don’t know how it happens, but I get these creative inspirations at the oddest times.

It started out while I was taking a shower.  It seems like many of my writing ideas happen while I’m in the shower.  However, the more I thought about it, the stronger my idea became.  I washed dishes and my idea was almost fully fleshed out.

So, what’s my idea?  I have another writing project plan, but this is a series of short stories.  It’s about a man who’s dying and his final wish is to visit the planets of the solar system.  He gets his wish in exchange for something.  I won’t say, because I don’t want to give anything away.  It’s planned to be nine parts and easy to read.  It’ll be part adventure and part sci-fi.

And that’s my shower of knowledge story. [Edit: Hahahaha! What was I thinking when I wrote this last line? I was half asleep at the time.]

There’s a Venn Diagram that’s been going around on the Internet for quite some time now, so I’m sure you’ve all seen it: 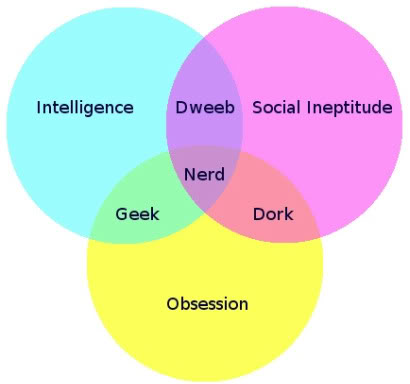 Intelligence, social ineptitude, and obsession are the prerequisites for a nerd.  Until university, I was a nerd.  I did very well in school, I was quite shy, and I was a big Star Trek fan.  Now, I’m not socially inept, as I teach for a living, and have had a decent social life.  That leaves me with geek.  I am a geek!  And I’m proud of it!

Nerds and geeks are very important people in the world, especially in the fields of science and engineering.  Many of the electronics and devices that you use everyday were developed by intelligent people who were most likely obsessed with the very things that they worked on.  You know Arthur C. Clarke, the author of 2001?  Not only was he a science fiction author, but he was also the inventor of the communications satellite.  Not bad!

I mentioned that I was obsessed with Star Trek.  I still am, though not as much as I used to be.  I’ve branched out a bit.  However, I do have a goal of owning every episode and movie on DVD or Blu-ray, as well as wanting to read many of the novels.  But that’s not my only obsession.  I’m also obsessed about fantasy novels.  It’s my favourite genre at the moment.  I also love science fiction, which was my first literary love.  I’m even writing science fiction.

Back in my childhood, I was obsessed with knowledge in general.  I enjoyed reading encyclopedias, and I couldn’t get enough of dinosaurs and astronomy.  Soon after, my obsession with Star Trek started.  Around the mid-80s, I played around with BASIC programming on my Apple IIe computer, which resulted in my obsession with computers.  I breezed through my computer classes in junior high school and high school, as I’d already known all about the topics we studied.  For a while, I was very interested in cars, and much to the surprise of my classmates in high school, I even took an automotives class.  The auto class was basically a kind of applied science, or engineering.  It really shouldn’t be surprising that I was interested in it.

But these days, my obsessions include more than just the classic geeky things.  I also really enjoy nature, history, and architecture.  I like to take pictures of buildings, old and new.  Living in Japan makes this easy for me, as Japan has some amazing modern buildings, as well as a huge number of historical sites.  I love walking long distance, though I haven’t had a chance to do much of that recently.  I walked 35 km in one day two years ago.  I discovered Instagram last year, and have taken more than 500 pictures with it.

On the more brainy side of things, I love maps and geography.  I can picture them in my mind quite easily, and I usually know exactly where I am and how to get somewhere.  I also love statistics.  I’m always watching how many views my blogs get, where the people live, which pages are popular, and so on.  I read all about sports stats, especially for hockey and sumo.  How’s that for an odd pairing?  Population of countries and cities is  a very interesting topic for me, as well.  I’ve used both geography and statistics to develop the world I’m basing my writing on.  Obsessions can be very useful!

I’m very happy to be a geek.  Life is more interesting this way.  There’s something interesting everywhere I look.

I selected this post to be featured on Book Review Blogs. Please visit the site and vote for my blog!