Why didn’t I find this YouTube channel before? You can find all of the episodes of The Joy of Painting from the first season until the fourteenth season, and they’re currently adding the fifteenth season.

I thought I’d show you the second episode from the first season. It looks kind of amateurish, but they had a very low budget. However, you still get to see his skill in painting. I like how simple his technique was, but the paintings turn out very well. I especially liked this one. Take a look.

Were you a fan of Bob Ross’? I used to watch his show when I was a kid. I’m happy to find his channel. Please leave a comment below.

If you read my story for the A to Z Challenge, you may remember the art I did for the first couple stories. I found it a little difficult to maintain that, since some of the stories were kind of difficult to draw. However, I do like to draw quite a bit, and will be doing a lot of concept art for Ariadne. Here are examples of what I drew for the challenge.

They’re pencil art, but I can do pen, as well as adding colour. The above pictures were sketches done in less than thirty minutes. If I take my time, I can make them look much better.

One of the rewards I have for Patreon is an advanced look at any concept art and sketches I do, as well as the chance to get an original drawing based on Ariadne.

But that’s not all, I’m interested in doing some science, science fiction, and fantasy style artwork that’s not related to Ariadne.

Any of you do art? Have any online? Let me know in the comments below.

Our budding artist drew something tonight that surprised us. A green bus with an orange stripe.

I keep wondering, do three-year-old children normally draw like this? Anyone with children have any idea?

Ever have your family portrait done?  I have.  Here it is.

On the left is me.  In the middle is my wife.  On the right is my daughter.  For some reason, we all have bows in our hair and wearing skirts.  I asked my daughter about the bow in my hair and she said it was cute.  So, she wants me to have a bow in my hair.

I’ve decided to do a little something extra for the A to Z Challenge.  As I said before, I’ll be writing short flash fiction each day.  The stories will be based on Ariadne, but will feature a person whose job starts with each letter of the alphabet.  The stories could be only 100 words long, or maybe even up to 500.  It really depends on what the character and scene, as well as time constraints.

The extra thing I want to do is to draw a quick sketch related to the scene.  It’ll be posted along with the story each day.  They most likely won’t feature the character, but part of the location.  It could be something they see or use.  This should be interesting.

I’m rather hesitant to say this kind of thing, but going through several child care websites (official ones, not ones made by average people), I think we have to make the choice whether to get our daughter tested.

As she’s learning two languages at once, it’s difficult to determine if she’s great with language.  She speaks mostly Japanese, and she’s getting fairly conversational at 3 years and 2 months old.  I’m not sure if she’s learning at a normal rate, as she’s also learning English.  She knows a lot of words in English, and occasionally speaks English.  She understands what I say to her, but she always responds in Japanese.  Of course, this is quite normal, as it’s what she hears and uses more often than not.  It’s really only with me and sometimes with my wife that she’s using English.  But we shouldn’t worry about her English ability, as it’ll catch up quickly by 5 years old.

However, when we observe her drawing ability, we are amazed.  I’d checked what kids her age should be drawing.  She should be drawing faces with a circle and two dots for eyes.  Then there may be arms and legs growing out of the head like sticks.  That’s all.  The first face she drew when she was still 2 years old had circles for eyes with circles for pupils.  It also had a nose and a smiling mouth.

But since that time, it’s evolved into faces with winking eyes, eyelashes, hair, ears, full bodies, legs, and arms with hands that have fingers.  She’s quite detailed.  She’s drawn her favourite characters with surprising accuracy for a child her age.

I checked what age her drawing ability represents.  It seems like anyone who saw her drawings would think she’s 4 or 5 years old.

She is obsessed with drawing.  Our home is filled with large pieces of paper with her artwork. She goes through several sheets of paper every day.

It’s not just art she loves.  She also has an interest in dancing, singing, and music.  She has a big artistic side.  On top of that, she loves building things with Lego. When she makes something, she usually uses symmetry, and once made the starship Enterprise without knowing what it is.  She even tries yoga poses and has good balance.

As for writing, she can write her name in both English and Japanese.  But the unusual thing is that she writes each letter from the top right instead of the top left.  It’s kind of how a left-handed child might write a letter, but she uses her right hand.  Not sure what’s going on there.

So, we have some things to think about.  Do we get her tested?  Is she gifted or merely just ahead of her peers?

You know, ever since my daughter started drawing actual pictures three months ago, her artistic ability has rapidly improved. Look at this. She did this at her nursery today. She’s only 3 years and 2 months old. I think we found one of her talents.

As far as I’ve been able to tell, it’s not normal for a child her age to draw the full body with arms and legs of a person. I need to do some research into this.

My daughter’s art has been getting better and better, but… 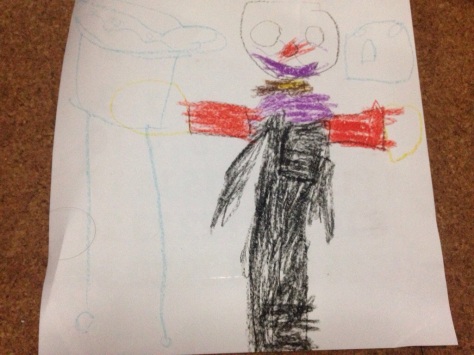 What does that look like to you?  To me, it looks like a clown from a nightmare.  It’s dark!  But if you ask her, she’ll say it’s Anpanman.  She loves watching Anpanman.  Here’s a sample of images courtesy of Google.

But what she drew isn’t bad for a 3 year and 1 month old.

My daughter loves to draw, and she only turned three years old a month ago.  So, I decided to share some of her artwork with you.

In this first picture, there’s a lot going on.  She says the thing at the top left is a ball. Around the bottom centre, you can see things that look like rabbits.  The rest, I really have no clue. 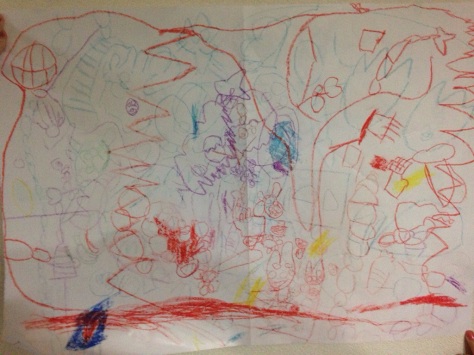 In the second picture, there’s also a lot, but more recognisable.  The blue thing at the top is an elephant, apparently.  The big round spiral is…a spiral.  Yeah, that’s what she told me.  Bottom right brown thing is a hamburger.  Bottom centre brown thing is a sandwich.  Top right is Mickey Mouse. The brown thing on the left is a tree.  And also on the left is something with a lot of purple round things.  She said it was blueberries, but I think she meant grapes.

And there you have it, artwork from a three year old.  I think she’ll be pretty good at drawing things.  My wife is quite good at art, and I also enjoy drawing.  We’ve got an artistic family.