Look at my hand. 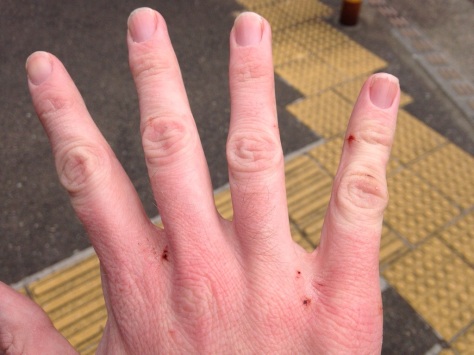 Dry, isn’t it? It happens every winter here in Japan. It’s quite dry. It’s almost always sunny, and the air usually doesn’t get humid. My skin loves the hot and humid summers. But I dread the winters.

Washing my hands hurts. Getting my wallet out of my pocket hurts.  Thankfully, typing doesn’t hurt. But typing while using moisturiser isn’t the best for my keyboard.

Well, that’s about all I had to say. Looking forward to more humid weather.

Valentine’s Day is fast approaching, chocolates are soon to be eaten. Romance is in the air. But how easy is it to write romance? Some authors are not romantic, while others do it with ease. Making it believable is a challenge. Nothing worse than cheesy romance. How do our authors handle it? 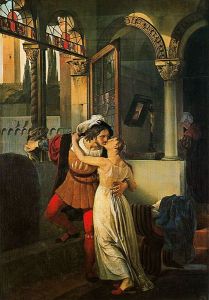 Question 67 – Valentine’s Day is coming up. How do you handle the romantic aspect of writing in fiction?

The way that feels right to me.

The most involved romantic subplots I’ve written don’t follow many conventions of the actual romance genre.

One thing I do with particular intent is try not to treat any big step forward in a relationship as an “ending”. There are plenty of stories that do that that I like, and I don’t have an issue with any specific one of them; I just think it’s already common enough as it is, and plenty of other ways to handle things.

Depends on what you mean by romance. I did write a story (which I did publish on blog titled “Dylann’s Waterfalls“) in which characters fell in love or more aptly were already in love and came to realize it through their friends. It was a nice, happy story with a bit of comedy. Think “When Harry Met Sally” kind of story. I attempted to write the kind of romance story my DW enjoys reading. The hot, sweaty, lusty kind. But they were on a secluded beach and ended up with sand where sand doesn’t belong and it wasn’t all that romantic so I quit. Perhaps if I read my DW’s books I could write it better.

I include romance in a story as dictated by the logical intersection of plot, circumstance and characterization.  I am often surprised which fictional characters in my head are attracted to each other.  But even when that happens, since I’m not writing romance-driven stories, I only include it if it’s instrumental to moving the plot forward, providing insight into character, or character growth.

I have absolutely no problem writing romance – it’s what I do. It often even shows up in my horror stories.

The short answer is “not well.” I’m not a very romantic person and tend to shy away from romantic aspects in fiction. I made the attempt in a previous draft of Jasper and tried to turn Edward and Cynthia into a couple, but I scrapped it in the end because it didn’t feel right to me.

Romance, whether the primary focus of a story or not, I see as a major driving point. I love romance. I love watching people love each other. It says a lot about an author to exclude romance in any way, shape or form. Romance brings characters alive. Lots of other things do, too, but nothing can like romance can. I always seem to have it intertwined into the network of my plots, on some scale, either micro or macro – it’s there.

I try to show that people in my stories have lives, even if I don’t always show all of it. My first novel has several romances, but very few sex scenes. I show that people that are in love, love each other, but my stories tend to be about big dramatic life-threatening/destroying events.

I don’t really know how to answer this because I don’t really consider the romantic aspect of writing fiction to be something that I need to “handle”. I find that romance comes fairly easily to me. Maybe that’s because I’m not nearly as good at writing it as I think I am, but I’ve just always found the romantic scenes to be pretty simple. Mind you, I’m also the kind of writer who likes to torture the living hell out of her characters, so often romance turns into a great deal of misery, but…yeah…I should probably leave that right there.

Ah, romance. I enjoy writing romance, well, in the dark and often snarky way that I do, but I don’t like to get too graphic. I prefer to let the reader’s imagination fill in the blanks. That puts me in the fade to black category of bringing romance to a its peak.

In my personal life, I’m not at all interested in romance, but I try not to let my nature influence my characters too much.  They all have their own wants and needs, so while my first book had nothing of the sort, the subsequent ones have seen relationships form, plus some brief not-quite-sex scenes.  It’s not obligatory though; I have several characters who are asexual or aromantic and quite willing to say that they’re not inclined. I think it’s an important part of character development either way (interested or non), but I haven’t made it a big part of the plot; in fact, the largest relationship-related storyline is the anti-romance between the protagonist and his (ex?)-girlfriend, who both need to figure some things out.  No Twu Wuv around here.

Not well. 🙂 Not a strength of mine. Not sure how to do it other than to show genuine caring between the characters.

This isn’t a major concern considering the nature of what I write. I won’t say that I’m not going to write about romance, though. Of the four different series of books I have planned, three have nothing to do with romance, while my main project, Ariadne, will have some aspect of romance. However, it’s going to be more in the background. I don’t plan on writing romance scenes. I just leave it to the reader to imagine. Unless romance furthers the plot, it’s not necessary to my stories. But if it is integral to the plot, then I will include it.

If you write, how do you depict romance in your writing? Or do you do any at all? Let us know in the comments below.

Late January and early February have been an extremely busy time, especially in the comments. Three regulars are out of the top six, and they’ve been replaced by three complete newcomers. These newcomers are also relatively new to this blog.  Who’s out? Sierra, Thomas, and Tracey, all regulars to Commentition. Let’s meet the Commentition rookies.

The top six commenters are based on the previous 1000 comments, nearly half of which are mine.  The rest go to all of you commenters.  443 were my comments, the rest went to others.  So here are the top six:

1. In first place is someone who is no stranger to this position. However, I have never seen this number of comments before. With 127 comments, the new leader is Joanne Corey! She blew away the competition. Her most recent post is a useful and important one: New email address. This makes me think I should have an email address specifically for my blogs.

2. In second place is another regular of ours who is almost always in the top two. With 62 comments, it’s stomperdad! His numbers have slipped, but there has been an increased number of comments by others. His most recent post is 10 Questions I asked my kids. Check it out, because it’s quite funny.

3. Our first newcomer to the top six is our third place commenter. With 42 comments, it’s Gradmama2011! Please go on over to her blog and say hello. She does a lot of poetry. Her most recent post is A trio of Shadorma poems of Trees.

4. In fourth place, we have another newcomer. With 22 comments, please welcome sonofabeach96! He’s participating in a challenge for his most recent post. Go on over and say hi to him and read Color Your World-Granny Smith Apple.

5. And in fifth place is our third and final newcomer to the top six! With 20 comments, it’s Miriam! She’s a freelance travel writer from Australia, and she blogs a lot about travel. Say hello to her and check out her latest post, Wednesday Wandering.

6. And finally, rounding out the top six is a returning commenter. With 16 comments, it’s SD Gates! Her most recent post is a very funny post about a very modern problem: CP Zombies are everywhere!

And that brings us to the end of this month’s Commentition. What a month it has been in the comments. Joanne and Gradmama2011 have dominated the comments recently. Stomperdad has another rival to contend with! What will next month bring? It’ll be my last Commentition while living in Japan. Let’s make it a great one. Thanks for all the comments!